Baselworld, the world’s largest trade exhibit for watches and jewellery, concluded on 30th March 2017. Regrouping some of the world’s most prestigious watch and jewellery brands each Spring in the quaint city of Basel, Switzerland, the show occupies about 1.5 million square feet to showcase novelties from about 1400 companies to its 120,000 visitors that consist of leading fashion magazine editors and important buyers from the world over.

Boasting of extravagant booths exemplifying stories behind their collection launches for the year, some of the leading luxury watch brands presenting their works of art and craftsmanship at Baselworld include Patek Philippe, Bulgari, Rolex, Breitling, Tag Heuer, Hublot, Zenith to name a few.

After close examination of all the brands at the prestigious fair over five days, Rose The Watch Bar presents its list of top watch novelties to round up the 2017 show:

As part of this prestige brand’s remarkable “Advanced Research” program (which deserves its own dedicated post – coming soon), Patek Philippe presented their latest innovation, the Aquanaut Travel Time Ref. 5650G to commemorate the 20-year anniversary of the Aquanaut. This timepiece boasts of two introductions – a “Spiromax” balance spring made of Silinvar – a patented silicon from Patek and a “flexible-mechanism” for the second-time zone settings, allowing the GMT indication to be adjusted forwards and backwards. The Aquanaut Travel Time is Patek Philippe’s first timepiece to have a partially open dial and a water resistant thick case (up to 120 meters). This mechanism boasts of the brand’s watchmaking prowess and features four crossed thin leaf springs, which cross over each other, making the assembly easier and reducing the number of components from 37 to just 12 parts, resulting in a faster assembly and a lubricant-free functionality, thus improving the longevity of the timepiece. As they say you never own a Patek Phillipe, but you are just custodians for the next generation! 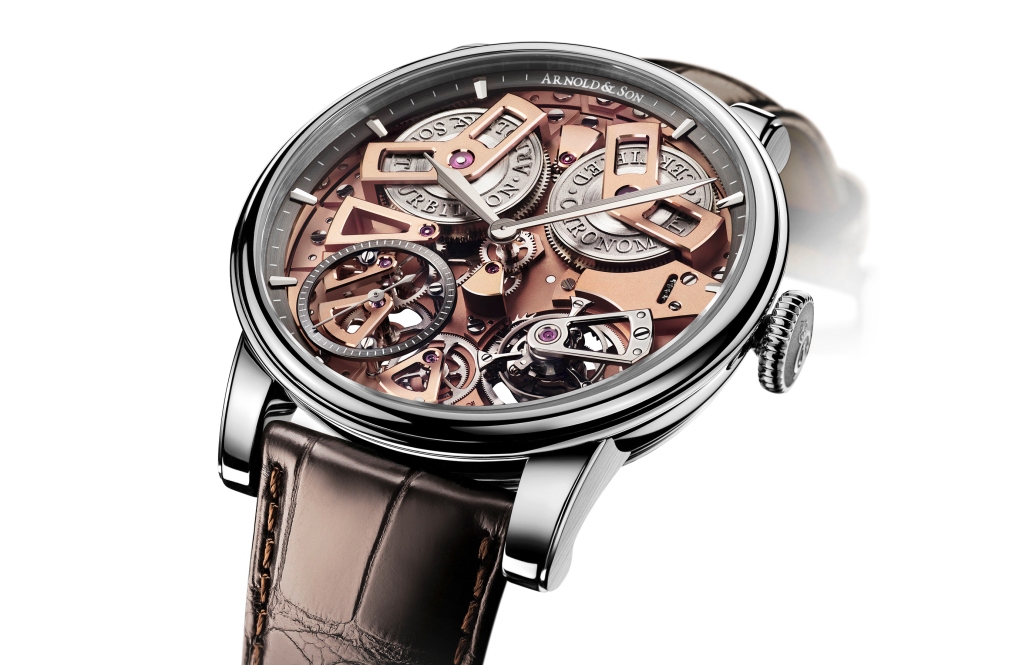 Taking inspiration from the John Arnold Pocket Chronometer No. 1/36 (the first pocket watch with a ‘chronometer’), the Tourbillion Chronometer No. 36 has a fresh new take on the skeletonization, precision and symmetry associated with all Arnold & Son timepieces. The Tourbillion COSC-certified Chronometer No. 36 remains faithful to the traditional techniques of haute-horlogerie execution that form the legacy of La-Joux Perret, one of the finest watch movement makers in the world, which has helmed Arnold & Son since 2010. An admirable aspect of this watch is that this 46mm open-worked timepiece gives you the ability to stare at its highly spectacular movement and show you what really moves the hands all the while keeping it handy for time-management as well.

Bulgari impressed many purists and watch enthusiasts in 2014 with Bulgari Octo Finissimo Tourbillon – the world’s slimmest tourbillon and then again with the world’s slimmest minute repeater with the Octo Finissimo Minute Repeater last year. The LVMH watch brand made a third breakthrough announcement this year and presented the world’s slimmest automatic watch – the Bulgari Octo Finissimo Automatique with just a 5.15mm thick sandblasted titanium case. Breaking records in ultra-thin automatic movements have been extremely difficult, however, with three records Bulgari have shown their watchmaking prowess and now must be considered as one of the world’s top watchmakers by even the most discerning watch collectors. The Octo Finissimo Automatique is powered by Bulgari’s in-house movement BLV 138 that is a mere 2.23mm thick and still has a 60 hour power reserve, making it one of the most impressive novelties at Baselworld 2017. 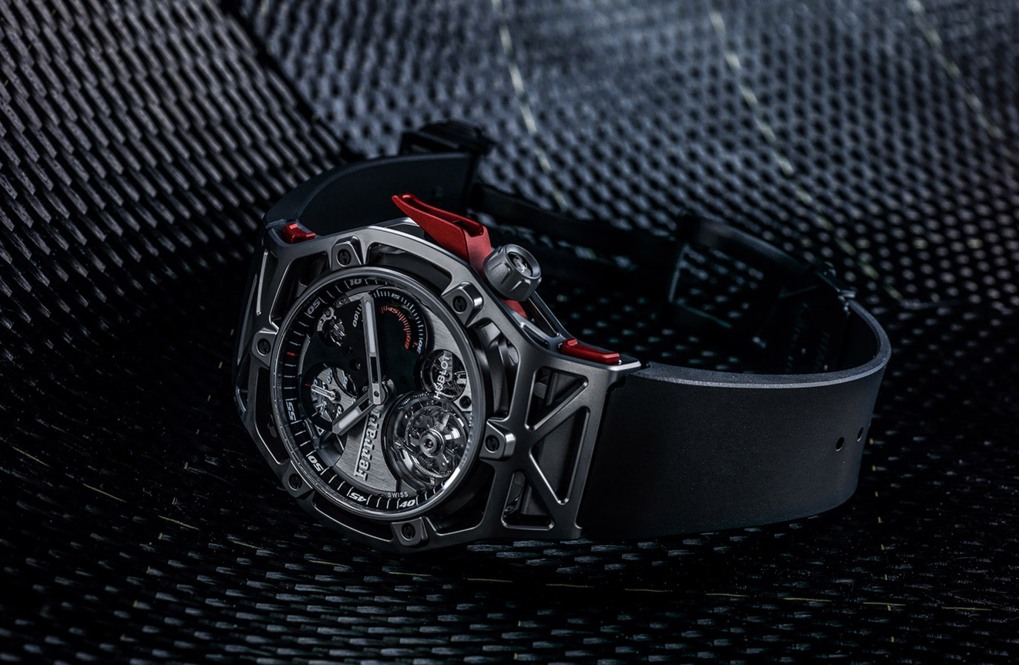 Honouring Ferrari’s 70th anniversary, Hublot presented the new Techframe Ferrari 70 years Tourbillon Chronograph, designed by the Italian carmaker with a brand new Hublot movement. The watchmaker’s new HUB6311 manual-wind movement within is made of 253 components and has a 5-day power reserve. This vivid watch is available in three versions – King Gold, Titanium and PEEK Carbon, limited to 70 pieces each. 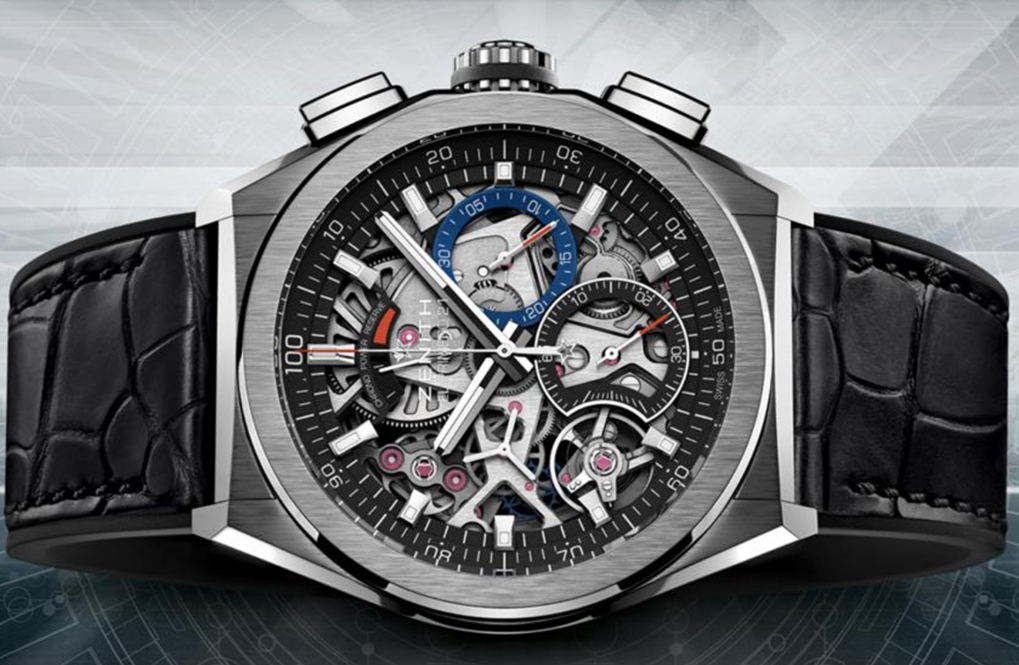 The Defy collection (originally known as Defi) is as old as the brand itself. The collection survived two world wars and stayed unchanged until the late 1990s, when they decided to discontinue it. However, under the brand’s interim CEO, Jean-Claude Biver and his astute vision, the collection was put together in about 6 months from the drawing board to its completion. The new Zenith Defy comes with a COSC chronometer certified El Primero 21 movement and is available in three variations – a skeleton dial, a black-coated titanium case with a skeleton dial and a basic titanium case model. The movement is special as it boasts of two escapements within the substantial 44mm wide dial – one for the time and the other for the chronograph function. The Defy El Primero 21 Chronograph is truly a symbol of elegance as well as Zenith’s endeavour to push the envelope further into horological mastery.

The Breitling Navitimer Rattrapante, a split-second chronograph is an interesting addition to the brand’s lineup of timepieces this year. Not only are split-second chronographs difficult to assemble, this 2017 novelty is a more accessible timepiece in its genre. Boasting of a COSC Chronometer-certified in-house Caliber B03 movement, the timepiece features date, time and 12-hour chronograph complications. The 45mm-wide Navitimer watch will be available in steel and a limited edition 18K Red Gold.

A stellar complication offered by the independent watch brand this year, the Space Mystery pays tribute to the astronomical pursuits of the watchmaker, Louis Moinet. The luxurious hand-wound timepiece comes with an oversized Tourbillon at 12 o’clock, which is held in its place by a small planet orbiting around it. The colour of the dial, called ‘Magic Blue’ is obtained from a patented secret manufacturing process by the brand. Rare extraterrestrial material – carbonaceous Chondrites Meteorite is inlaid in the dial at 9 o’clock, lending a poetry of stars on the wearer’s wrist. With the hours and minutes indicator at 6 o’clock enclosed within the 46mm round dial, the timepiece will be available in 18K White Gold and Pink Gold, limited to 12 pieces each. 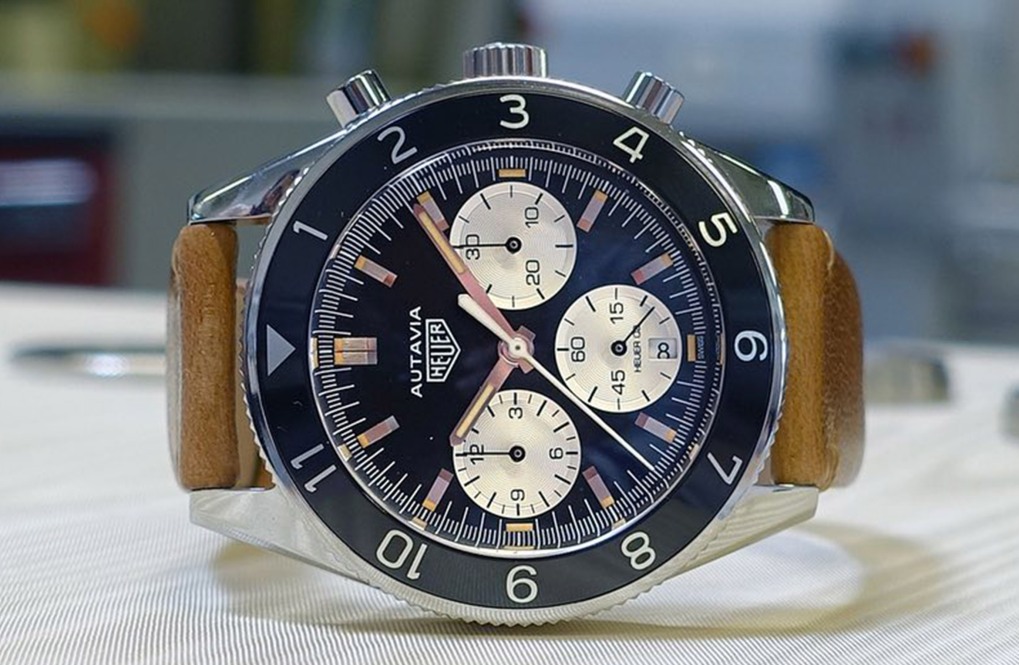 A luxury brand with an impressive past and a strong focus on relevance among its loyalists and watch connoisseurs, Tag Heuer presented to its fans a pre-selection of 16 vintage Autavia’s to choose from the 1960’s, a glorious decade within which the Autavia’s were introduced. The name ‘Autavia’ is in fact derived from a combination of “Automobile” and “Aviation”, due to its continued patronage from legendary racing drivers and pilots since it first surfaced in 1933. The 2017 Autavia is encased with the brand’s own manufacture caliber 02 movement within a 42 mm waterproof dial exposed through a sapphire case back and offers chronograph and date complication along with a 12-hour index, that may even assist as a second time zone function for your travels. After its disappearance in 1986, this nifty Baselworld 2017 revival comes in two versions – one with a seven-row stainless steel bracelet and another on a distressed brown calfskin leather strap with ecru stitching. With the original “Heuer” logo on the dial inspired from its 60s’ predecessors, the Tag Heuer Autavia is designed to withstand the test of time.

A follow-up to Tag Heuer’s Connected Smartwatch launched in 2016, the brand pushed its customization and modularity into this new model using a range of coloured bezels and premium materials. Addressing the criticism that its earlier watch did not look like a Tag Heuer watch, the Modular Connected Smartwatch gives buyers options of leather straps and gold bezels to add a luxe touch to their watch. This truly customisable watch offers buyers changeable straps, buckles, and even lugs to give its wearer more than 4,000 variations to the same watch.

Continuing the successful Serpentine saga, Bulgari launched the most exciting and vibrant new version of the Serpenti. Straying over from the usual steel and gold variations, the Serpenti Skin offers a double wrap-around snake skin strap made from Karung, a non-venomous water snake known for its thin and supple hide. The watch’s mother-of-pearl, finely lacquered and sunburst guilloché 27mm dial will be available in black, white, red and green. Additionally, each Serpenti Skin watch will come with an additional interchangeable strap enabling each customer to define her own expression of the Serpenti.

A Guide to Haute Horlogerie